The Benefits of COTS in Space Applications 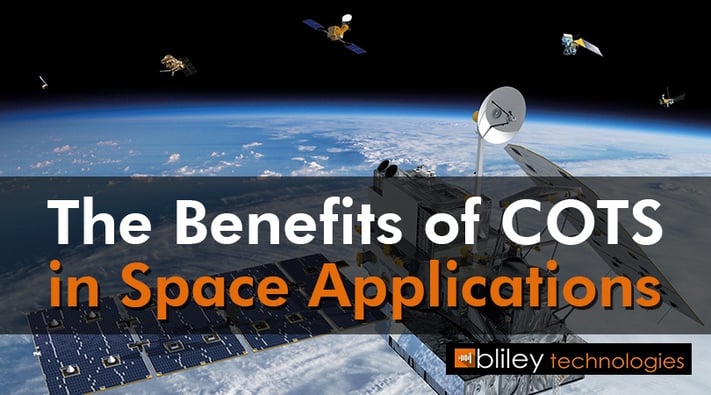 Space exploration has never been cheap. In the days of the Apollo program, the cost of sending payloads into space was such that only government agencies with billions of dollars to spend could afford it. Over time, those costs have begun to come down, but even with advances in launch technology, funding for such activities ebbs and flows. In the wake of budget cuts for military and aerospace Research and Development, there has been much pressure to develop systems and designs that meet the needs of space projects and reduce costs without sacrificing quality. This is where COTS (Commercial Off-The Shelf) products offer a potential solution.

When is it Appropriate to Use COTS for Space Applications?

COTS may seem like a new topic for those focused only on space, but the concept has been in use for decades in a different realm. In 1994, U.S. Secretary of Defense William Perry issued a directive prioritizing the use of COTS components in military applications for the first time. The move marked a transition from the use of strictly military-developed Electrical, Electronic, and Electromechanical (EEE) components in military aircraft, vehicles, and equipment. While many were concerned about a potential drop in quality and reliability, time has proven that these fears were unfounded. COTS components are now used across all branches of the military with great success.

Traditionally, NASA has made use of critical space system EEE parts which undergo 100% parts-level inspections for reliability and quality. While this has ensured a high level of both, it is also quite expensive. In light of this, NASA’s Commercial Crew Program (CCP) is working with private sector suppliers to develop viable and safe COTS components.

Based on the military’s success with COTS, it is certainly reasonable to expect that COTS can significantly reduce overhead in space exploration, but the truth is that cutting costs should not be the only factor in deciding if they should be used.

A good rule of thumb to help guide the decision on using COTS in space: First, determine the nature of the mission and the level of reliability required to successfully complete it, THEN consider budget and time constraints.

One of the sources of confusion is the indiscriminate use of terms like “space-worthy” to describe parts and systems. Whether or not a part (COTS or not) is “worthy” for the mission is entirely dependent on what the mission is.

In addition to component-specific factors like weight, operating temperatures, and physical dimensions, more mission-oriented questions must also be addressed: How long will the component be used in space? Will it be an orbital mission, and if so, which orbital range? Or is it a deep space mission where maintenance is not an option? All of these are questions that must be answered before choosing to go with a COTS solution.

As you can see, the mission itself is ultimately what determines whether a COTS part is “space-worthy.”

NASA is now beginning to embrace COTS— slowly. Much of this has to do with the natural human tendency to resist change. But deciding to utilize COTS components is never a decision that should be taken lightly. In some situations, it may indeed be the most logical choice. In others, it could potentially be a dangerous mistake. Whether or not COTS is a viable solution depends on the specifics of the mission— and there is one unique aspect to space missions that must be taken into account: radiation.

Part of what has prevented COTS parts from being adopted in space is that most COTS manufacturers do not characterize how sensitive their parts are to the effects of radiation found in outer space. Performance in radiation screening is a make-or-break factor in whether or not a COTS part is a viable option. We’ll explore the specifics and importance of radiation testing more in Part 2 of our series on COTS.

As it stands right now, COTS parts are a good option for space applications if they offer a better level of performance than the existing range of EEE parts, or if they can perform a specific function that those parts cannot. Ultimately, the mission specifics and the amount of acceptable risk should be the determining factors in deciding to use a COTS solution in space.

At Bliley, we take great pride in providing exceptional low-phase noise solutions for space applications and other markets. Learn more about our products and how we can help you excel in the coming Space 2.0 era.