What Does it Mean for an RF Amplifier to be Single-ended? 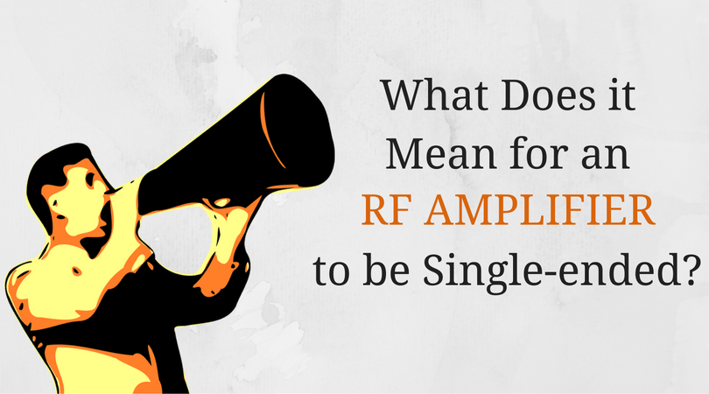 If you're an electrical engineer and familiar with the musical artist Adele's most recent single, "Hello", you may have thought to yourself, "Man, sounds like she could really use a good quality amplifier!"

What is an RF Amplifier?

A radio frequency power amplifier is a form of an electronic device which is mainly used for the conversion of signals that have a low power into signals of higher power. A radio frequency amplifier is constructed specifically to deal with gain, heat loss, as well as input and output impedance matching.

Today, amplifiers operate in different kinds of modes, which are also known as classes, in order to perform their function in a satisfactory manner. Solid state devices (also known as SSPAs or Solid State Power Amplifiers) are used to make modern radio frequency amplifiers even better and more efficient in terms of signal conversion.

Breaking Down the Individual Components

A radio frequency amplifier is composed of the following three basic blocks:

Radio frequency amplifiers are primarily used to drive another source of high power. They are also used to drive a transmitting antenna and for exciting microwave cavity resonators. This technology is useful for voice and data communication and for weather sensing by using radar.

What Single-ended Amplifiers Do

When a radio frequency amplifier is single-ended, that means that half of the input wave has been amplified. What this means is that a portion of the wave is rectified and filtered into a low distortion waveform that carries the pattern of a sine wave. A filter is used that matches the impedance offered by the output of the amplification device as well as the load.

What this does is that it creates an amplifier with a low distortion as well as lower costs. However, for this kind of device to work the output filter and the matching network need to be fairly high. If the bandwidth is low, it needs to be returned for a frequently changing operating frequency. While this makes no difference for broadcasting purposes, it can cause inconveniences for amateur radio hobbyists.

Thus we see that single-ended RF amplifiers can be quite useful for low-end work during the process of signal amplification but are of limited use for the purpose of high-end data signal conversion.

What are your thoughts?

Have you had experiences with single-ended amplifiers or have additional input? Leave us a comment! We always enjoy hearing from you.