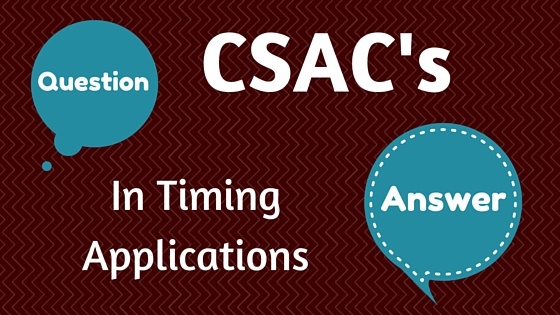 CSAC stands for Chip-Scale Atomic Clock. CSAC are relatively new to the market, therefore, many people are unfamiliar with what they are, what they do, and what they are used for.

Unfortunately, many engineers and companies are also completely unaware that CSAC may eventually be required in their systems. This is especially true for government systems and applications.

With a bright future likely for CSAC, it's important for system engineers to start familiarizing themselves with CSAC to get ahead of the game.

To learn more about CSAC and the best ways to incorporate them in your systems, we interviewed one of our senior engineers, Dave, to help get a better understanding of this topic:

1. Chip-Scale Atomic Clocks are relatively new in the market. What are CSAC? What do they do? And how do they work?

The CSAC is a Chip Scale Atomic Clock.  Unlike a traditional quartz based frequency reference that uses quartz as the resonant element, the CSAC uses a MEMS silicon cavity that contains Cesium gas.  At the bottom of the cavity there is a VCSEL (vertical cavity surface emitting laser) that is driven by a microwave frequency source. On the other end of the VCSEL is a photodetector that senses the net change in absorbed light by the cesium gas. This change in emitted light is monitored through DSP and ultimately creates an extremely stable reference frequency that is used to discipline a 10MHz (or other standard frequency) oscillator.

2. What kinds of systems would CSAC work well in?

The CSAC is a low power device and would work well in many backpack applications such as IED jammers or radios.  It would also lend itself for Position, Navigation, and Timing (PNT) applications due to the long term stability.  Timing hold-over in the event of GPS outages is a common application of this technology.

3. Are there any cases where Chip-Scale Atomic Clocks are (or will be) required in specific systems? If so, why?

Most systems that require accurate timing (especially in GPS contested environments) may be converted to CSAC based timing at some point.  The overall power, cost and size versus that of a traditional OCXO or Low Power OCXO is also very attractive for a system designer.  While the total volume of the CSAC may be larger than quartz oscillator based OCXOs, the CSAC provides an extremely accurate clock in terms of long term stability that quartz frequency references cannot achieve.  The relative cost and reliability of these devices is still a concern; however over time, refining manufacturing processes will alleviate these issues. 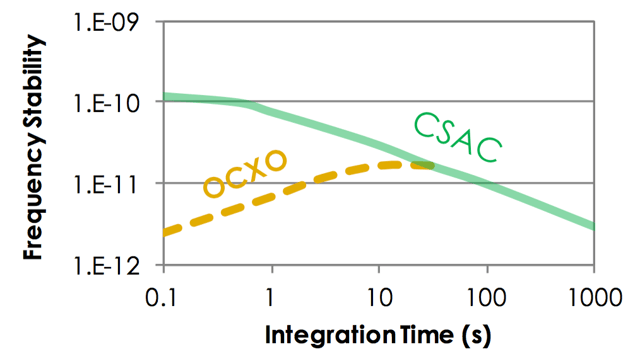 Extreme temperatures is currently a major concern for CSACs.  The fundamental operation of the CSAC physics package requires the cesium gas to behave in a controlled and predictable manner.  We've seen a dramatic decrease in mission life of CSAC modules when they are subjected to the harshest temperature ranges (-40ºC to +85ºC).

Dynamic environments with high acceleration or g-forces can also degrade performance of these timing modules.  Inside the CSAC package is a relatively standard performance TCXO with an AT-cut quartz crystal.  The AT-cut crystal as relatively poor g-sensitivity when compared to SC-cut quartz crystals typically found inside OCXOs.  For that reason, if the CSAC is intended to be used in dynamic high-G environments, it is recommended that an external reference oscillator with superior g-sensitivity or active g-compensation be used to discipline the CSAC.