The Biggest Big Data Challenge in the EW Battlespace 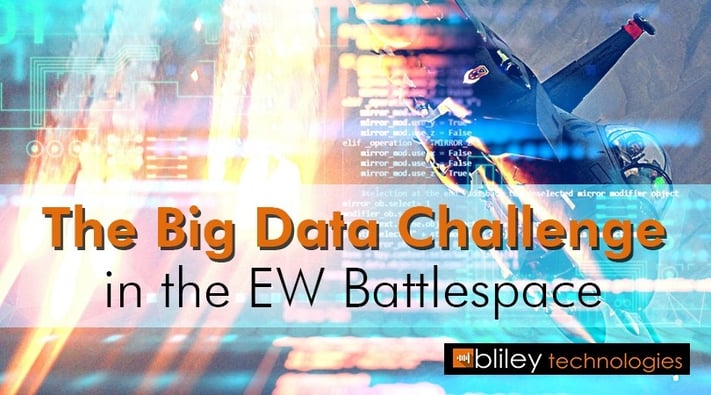 The Big Data challenge arises when those millions of sensors produce consistent but varying data streams in all of those different formats, also known as "siloed data." The challenge is to synthesize all of the data in multiple forms from millions of sensors so that it can be converted to information for timely tactical action by decision makers. Department of Defense applications for data fusion in electronic warfare include:

According to this report at NavSea Warfare Center "The goal of using data fusion in multi-sensor environments is to obtain a lower detection error probability and a higher reliability by using data from multiple distributed sources."

And therein lies a series of challenges. Incoming data may be siloed by type, owner, or geography. Is the data coming from a relevant source and is it consistent? Data streams could be corrupted by cyber-attacks, so cybersecurity is also an issue to be addressed.

To convert fused data into useful knowledge, algorithms need to be taught how to interpret the data, so there is a machine learning component involved. The challenge for both military and civilian sectors (i.e., civilian autonomous devices such as self-driving cars) will only increase as the Internet of Things expands the number of deployed sensors exponentially, even into the billions. The enhanced advantage of data from multiple redundant sources and sensors over that of a single sensor is counterbalanced by the sheer number of irrelevant sensors also providing data streams which have to be sorted out in the data fusion process.

Data Fusion and the Current State-of-the-Art

Data fusion incorporates techniques from a wide range of technologies including signal and image processing, pattern recognition, statistical estimation, and artificial intelligence. In this report from the Pennsylvania State University Applied Research Laboratory, authors David L. Hall and Alan Steinberg define the ambitious scope of the data fusion concept with the question frequently posed by data fusion critics, "Why is it that when all is said and done (in data fusion), there is so much more said than done?"

While there have been significant returns on the enormous investments made in data fusion by the DoD over the past two decades, there yet remain some limitations to overcome for support of individual soldiers and effective human-computer interface.

Ballistic missile defense is the priority for GMD, providing the capability, as GMD director Dr. Greg Hyslop puts it, "to hit a bullet with a bullet." The GMD program blends data from mobile sea-based radar systems with the Upgraded Early Warning Radar at Beale Air Force base in California, radar systems aboard Aegis-equipped cruisers and destroyers, Theater High-Altitude Air Defense (THAAD) missile batteries, and surveillance systems in Alaska and Europe.

As Drs. Hall and Steinberg point out in their report, in the data fusion process "There is no substitute for a good sensor." For demanding DoD applications, high-quality electronic components are mandatory to ensure maximum reliability when the lives of our warfighters depend on superior performance.

At Bliley Technologies we've been producing the best frequency control devices in the universe for 85 years, and we have the design and manufacturing expertise to make your innovative application designs a reality, so don't hesitate to contact us.