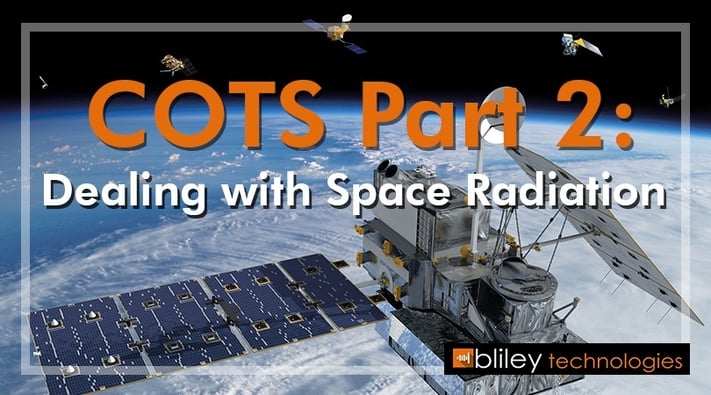 In Part 1 of our series on COTS components for space applications, we discussed why the government is increasingly turning to “commercial off the shelf” parts for spacecraft, satellites and more. COTS parts have already been successfully adopted in many military applications, but when it comes to space, COTS adoption has been much slower.

With space applications, the margin for error is, in some ways, even smaller than in military applications, even when no lives are at risk. Once a system is up in space, it is extraordinarily expensive and difficult to conduct repairs. In many cases, it may not be an option at all.

As we mentioned in Part 1, the nature of the mission, and not just technical specifications, are ultimately what determines if a COTS component is suitable for use in space. The most important criteria that COTS performance is judged by are:

There are three primary considerations regarding radiation effects for COTS components.

But how are COTS components tested for radiation performance? Replicating the conditions that COTS parts will be operating in is very challenging. In space, the part must operate in zero gravity, very cold temperatures, no atmosphere and most critically, it must perform properly under exposure to the high levels of space radiation outside the earth’s atmosphere.

Engineers test COTS parts through controlled exposure to different types and intensities of radiation in laboratory settings. One example is the KAM-500 data acquisition unit (DAU) manufactured by Curtiss-Wright. A series of tests were performed exposing the unit to both proton radiation and heavy ions, and measuring the effects it had on performance. The engineers incorporated an active electronic safety net to protect against radiation damage. This is an example of a COTS component that could be a viable option for certain space applications.

Using radiation-hardened components which are composed of materials specifically designed to withstand radiation exposure can be effective, but also very expensive. Since one of the objectives of choosing COTS in the first place is to reduce costs, let’s examine some of the other options for mitigating the effects of radiation in space.

One of the most effective methods is to simply shield the sensitive COTS components with a physical barrier of some kind that provides a layer of defense against radiated particles. Aluminum housing, for example, has proven to be an effective technique in defending against solar radiation. Of course, such shielding will add to the weight of the design, which may or may not be an option. Other approaches focus more on circuit design, such as logic redundancy and voting circuits which can be used to reduce the chances of a Single Event Upset.

Ultimately, the mission specifics will determine whether a given COTS part can be used or not. In the future, more and more COTS parts must be designed to withstand the type and quantity of radiation that commercial space activity must cope with, and new expectations for quality will be established and become industry standards.

We’re proud to be playing a leading role in elevating the quality of commercial space components with our selection of superior RF designs, including our Ultra Stable BG61 Quartz Oscillator used in the Cassini, New Horizons and Mars Global Surveyor Missions.

Read on to learn more about our space products and markets we serve, and put our nearly 90-year track record of engineering excellence to work for you.