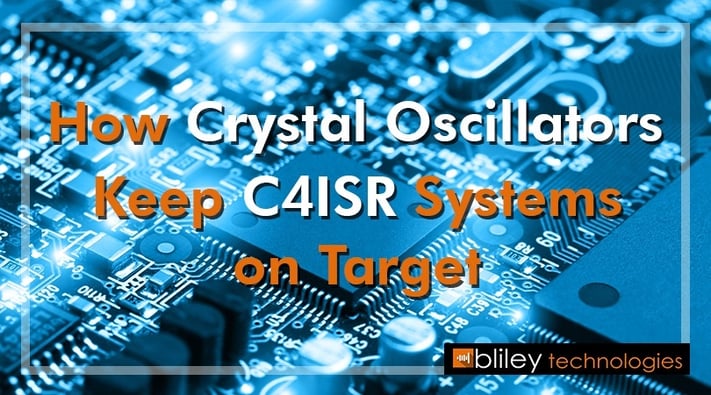 The availability of high-quality, actionable information is often what makes the difference between victory and defeat on the battlefield. Military forces around the world make use of a variety of systems and disciplines to obtain and transmit information to key decision-makers.

In this present era where electronic and cyber warfare are playing an ever more important role, the advantage will go to the military forces which have the most powerful C4ISR systems in place. Many laypeople would be surprised to know that powerful military capabilities are made possible by a common technology found in their phone; crystal oscillators are the key to making advanced C4ISR a reality.

“C4ISR” might be kind of a clunky acronym, it encompasses some pretty important things. It stands for Command and Control, Communications, and Computers (the 4 “C”s), as well as Intelligence, Surveillance, and Reconnaissance. Here’s a basic overview of what C4ISR entails:

These different domains of C4ISR are distinct, but they work together to give warfighters as well as military and civilian decision-makers the information they need to ensure mission success.

The Role of Crystal Oscillators in C4ISR

They key technology that makes C4ISR possible in 21st-century terms is radio frequency-based systems, and the foundation of all modern RF systems is the crystal oscillator.

For example, satellites are used to provide positioning, navigation and timing capabilities to ground-based teams, manned aircraft, drones, ships and more across all branches of the United States military. These satellites rely on the signal generation capability of crystal oscillators to transmit and receive information. Satellites which are used for surveillance purposes are no different.

RADAR systems make use of signals generated by crystal oscillation to detect ships and aircraft in the operational environment, and radio systems used for communication in any military context all use crystal oscillators to generate radio signals.

Crystal oscillators are also a fundamental technology in electronic warfare (EW) systems. EW is slated to become one of the most important domains of military tech for the foreseeable future. As signal jamming and other forms of EW become more advanced, more sophisticated oscillator designs will be needed to both execute and defend against electronic attacks.

Oscillators are so omnipresent in C4ISR-related applications that it is easy to take them for granted. Oscillators are a key enabler of so much modern military technology. Simply put, effective C4ISR just doesn’t happen without well-designed crystal oscillator technology.

We’re proud to offer the best low-phase noise crystal oscillator designs on the market for C4ISR and all defense-related applications. Read on to learn more about our expert frequency-generation solutions for the defense sector, and other markets we serve.