They help guide the freighters which ship the electronics, clothing, and countless other products we use every day to our shores.

They help meteorologists detect advanced weather patterns to produce the weather forecasts we see every morning on the news.

Further, radar is used for:

Clearly radar is important for many reasons. Here's a deeper look into what exactly radar technology is and what makes it so effective for many applications.


What is RADAR and how does it work?

In 1940, the US Navy developed the acronym “Radio Detection And Ranging”, or “RADAR”, as we know it today. Radar is a radio-wave based technology that is used for detecting physical objects rather than transmitting messages. It works in a similar way to echolocation used by animals like bats: a RADAR system uses a magnetron to generate radio waves and broadcasts them through an antenna, which serves as a transmitter. These waves reflect off objects in the environment and bounce back to the antenna, which doubles as a receiver. The antenna rapidly switches back and forth between transmitting and receiving by means of a duplexer.

Radar’s pulse a specific frequency and then measure the change of each returning frequency pulse. Each pulse change is related to the velocity of an object in the radar’s view by making use of the doppler effect.

Objects moving very slowly will return a pulse that is very close to the original frequency of the pulse sent out. This is where phase noise becomes a concern. The smaller and slower an object is, the more important it is that phase noise does not effect the signal. It's strongly suggested that military radar applications that may require tracking small, slow moving objects use a very high quality OCXO with powerful phase noise eliminating abilities.

If you're interested in learning how to calculate the doppler effect, we've found this great source for doppler shift equations.

A Radar is Born

Radar as a theoretical concept was understood as early as the late 19th century. Heinrich Hertz, a German physicist who proved the existence of electromagnetic waves (and for whom the “hertz” unit of measurement is named) was the first to discover in 1888 that radio waves bounced off metallic objects.

Over the decades more physicists began to experiment with using radio waves to sense physical objects via reflection, and in 1904, the physicist Christian Hülsmeyer gave the first public demonstrations of the telemobiloscope, a device which made use of radio wave reflection to detect ships and avoid collisions at sea. While not a true radar system in the modern sense, it was one of the earliest devices to make use of radio waves in this way.

During the 1930s, rapid advancements were made in radio wave technology in Europe and North America. The governments of European powers, in particular, felt that war was near, and various countries launched their own secret programs to determine how radio waves could be harnessed in new ways to gain a military advantage. In 1935, the British Air Ministry recruited the physicist Robert Watson-Watt to develop an electromagnetic “death ray” weapon. 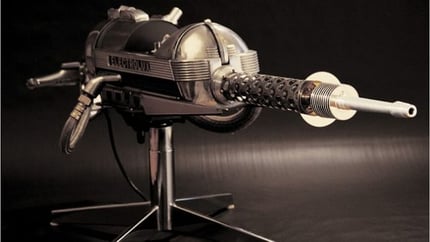 While the British never got their death ray, they did get something much more powerful: Watson-Watt’s radio transmitter towers were able to create a signal that could reflect off and detect planes up to 100 miles away. The British now had an unprecedented ability to sense enemy aircraft before they could come within attack range. ("Death Ray" Image from io9.gizmodo.com)

By 1939, there were 19 radar stations set up in a perimeter around Great Britain. These stations, known as the “Chain Home”, allowed the British to detect and defend against German bombers, and were quite possibly what turned the tide in the Allies’ favor. Some historians today argue that advanced radar systems might very well have been the most significant development of World War II— even more so than the atomic bomb.

Some of the most exciting developments in radar technology are happening with systems operating in the millimeter wave range (30 – 300 GHz). Millimeter waves are a key enabler of the coming 5G era, and every aspect of the RF industry will be affected, including radar design.

"Military bandwidths" are also commonly used in radar systems (S, X, Ku, Ka, and others). S and X are considered the most popular in today's military and defense radars. Although, Ku and Ka RADAR bands are becoming an emerging market in this space.

Be aware: Many of these radars, especially those used in high vibration military environments, are subject to phase noise. Learn more: Low Phase Noise Solutions for Radar & Communications Systems.

Just as the development of accurate radar systems in WW II was a technological game-changer, we are the cusp of a new revolution in radar design. Read on to learn more about the challenges and the opportunities of these advances in radar design.

Taking RADAR to the Next Level

Our Poseidon Series OCXO has been proven to work great in radar systems and helps bring them to the next level. Maritime, airborne, and GMD RADAR applications may be a great fit for Poseidon. Check out our Poseidon 2 datasheet...we're ready to take your radar application further!