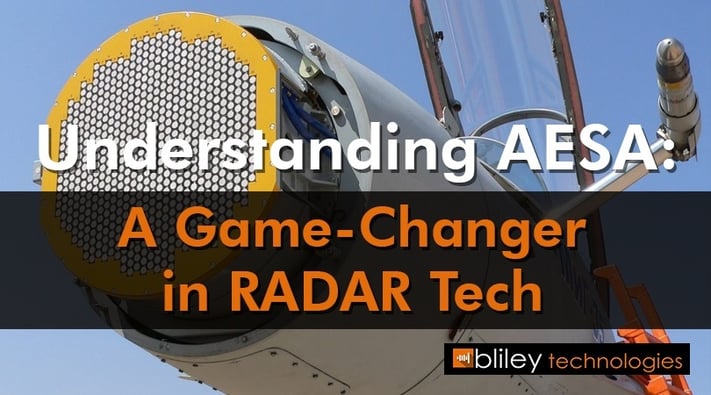 When they were first unveiled, Active Electronically Scanned Array (AESA) systems represented a huge leap forward in radar technology. But as electronic warfare systems become more advanced and more critical to maintaining a military advantage, what does the future hold for AESA systems? Let’s explore how this amazing technology works and how you can expect it to evolve in the near future.

Active Electronically Scanned Arrays are considered a phased array system, which consists of an array of antennas which form a beam of radio waves that can be aimed in different directions without physically moving the antennae themselves. The primary use of AESA technology is in radar systems.

The evolution of ASEA technology can be traced back to the early 1960s with the development of the passive electronically scanned array (PESA) radar, a solid state system which takes a signal from a single source and uses the phase shifter modules to selectively delay certain parts of the signal while allowing others to transmit without delay. Transmitting the signal in this way can produce differently shaped signals, effectively pointing the signal beam in different directions. This is sometimes referred to as beam steering.

AESA systems are currently used on many different military platforms, including military aircraft and drones, to provide superior situational awareness.

One of the major advantages of an AESA system its high degree of resistance to electronic jamming techniques. Radar jamming is usually done by determining the frequency at which an enemy radar is broadcasting and then transmitting a signal at that same frequency to confuse it. Over time, engineers developed a way to counteract this form of jamming by designing radar systems which could change their frequency with each pulse. But as radar advanced, so did jamming techniques. In addition to changing frequencies, AESA systems can distribute frequencies across a wide band, even within individual pulses, a radar technique called “chirping”. This combination of traits makes it much harder to jam an AESA system than other forms of radar.

AESA systems also have a low probability of intercept by an enemy radar warning receiver (RWR). An RWR allows an aircraft or vehicle to determine when a radar beam from an outside source has struck it. In doing so, it can also determine the beam’s point of origin, and thus, the enemy’s position. AESA systems are highly effective in overcoming RWRs. Because the “chirps” mentioned above change frequency so rapidly, and in a totally random sequence, it becomes very difficult for an RWR to tell whether the AESA radar beam is, in fact, a radar signal at all, or just part of the ambient “white noise” radio signals found all over the world.

Yet another benefit of using AESA systems is that each module operates independently, so a failure in a single module will not have any significant effect on overall system performance. AESA technology can also be used to create high-bandwidth data links between aircraft and other equipped systems.

This radar technology also supports multiple modes that allow the system to take on a wide variety of tasks including:

As with most technology, there are a few challenges that manufacturer's face during the development of AESA radar tech. The most common challenges include power, cooling, weight, and price.

Luckily, advancements have already been made (and are continuing to advance) as technology continues to improve. For example, the weight of these radars has decreased by over half within the past few years along with a decrease in size. This allows the AESA to be mounted in areas other than just the nose of an aircraft. The radar will be able to be oriented in multiple directions and provide a wider perspective.

The Future of AESA

As breifly mentioned, as AESA technology has advanced, it has become smaller and more affordable. This has allowed many countries to incorporate AESA into legacy systems on the ground, in the sea, and in the air.

In 2016, Raytheon made headlines in the defense tech world by debuting its gallium nitride (GaN)-based AESA upgrade to the Patriot™ Air and Missile Defense System at the Association of the US Army’s winter trade show. Since its debut, the system has successfully completed 1000 operating hours.  By pairing two of these upgraded systems facing in opposite directions, they can cover a complete, 360-degree range.

Countries around the world are adding AESA radar into their military aircraft and vessels, and contractors around the world are rushing to meet the demand. India recently contracted an Israeli firm to furnish its fleet of Jaguar fighter jets with new AESA radar systems. While these jets are old, incorporating AESA radar capabilities will allow these and other legacy craft to remain relevant in a world where electronic warfare is becoming ever more important. Simply put: without AESA, modern conventional militaries are obsolete. It’s no longer optional, and it’s going to become more widespread as time goes on.

Our best-in-class low g OCXO, Poseidon 2, may be a great fit for RADAR and other military applications. Check out the datasheet now!