Traditional Use of Cube Satellites 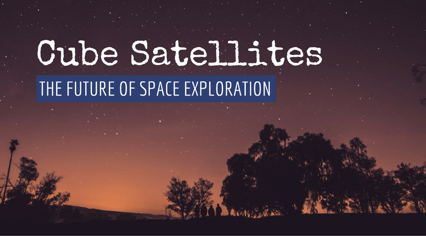 The outer atmosphere around Earth contains more than a 100 satellites that are shaped like Rubik's cubes but are a bit larger. Closely packed with various instruments, these satellites have been launched at frequent intervals since 2013.

The purpose of these tiny satellites is many. They are used to conduct experiments, take pictures of the planet, facilitate radio communication and demonstrate spacecraft related technologies that need to have the soundness of their design proven by way of real world testing. Cube satellites are also often launched independently by smaller organizations such as colleges and universities to demonstrate their prowess, and as a symbol of aerospace ambitions.

But now a new role is being envisioned for cube satellites, also known as CubeSats. There is a paradigm shift happening now in the space industry. Instead of using the traditional "high rel" (high reliability) approach where you launch a few very large and VERY costly satellites, now the focus has shifted to a new approach where you launch MANY small 'cheap' satellites instead. The group of CubeSats act in concert in what is called a "constellation." This paradigm shift is largely referred to as the "New Space" movement.

The reasoning behind this idea makes sense on many levels. The cost of manufacturing would be much less for smaller satellites. The average mission life has decreased from decades to a few years. This reduces the strict requirements for radiation and environmental survivabilityt and opens the door for the use of COTS (commercial off-the-shelf) components.

Many hurdles need to be overcome before the vision turns into a reality. Some of these include:

When you’ve been trained your whole career to put reliability and mission life above all else (including cost), it is difficult to accept that COTS components may be acceptable for these New Space missions.  Aggressive price targets, relaxed radiation hardness, and no need for part pedigree and documentation enable COTS components to be considered.

Special care should still be taken when going through the design process.  Automotive, industrial, or military grade parts may offer an added level of protection for an incremental increase in cost.  Some part vendors may also be willing to offer “radiation tolerant” parts that are built on the same production line as their space qualified counterparts.  The only difference being the paperwork and certification that normally follows “high rel” components.

Large constellations of CubeSats represent an entirely different CONOPS (concept of operations) over traditional ‘exquisite’ space systems.  Instead of carefully tracking and controlling a small number of large satellites, system operators will play a more passive, monitoring role.  With limited attitude and propulsion controls on board these small payloads, mission operators have limited knobs they can turn.

Getting the Most Out of Smaller Payloads

One other challenge faced by system integrators of these small payloads is getting the most performance out of them.  For example, the number of sub-systems on these small satellites are just as numerous as their larger counterparts, but the SWAP (size, weight, and power) of a CubeSat is extremely limited.  One of the largest components by size and weight is the power system which usually consists of batteries and solar arrays.  Careful study of power budgets for these small payloads must be considered and flowed down to sub-system providers.  Reducing power consumption on critical components can mean more room for fuel, shielding, or communications systems; extending the usefulness and mission life of the payload.

Thus, we see that engineers are using creative and innovative approaches and their natural ingenuity to prepare the groundwork for the day when cube satellites will become powerful space-faring vehicles in their own right.