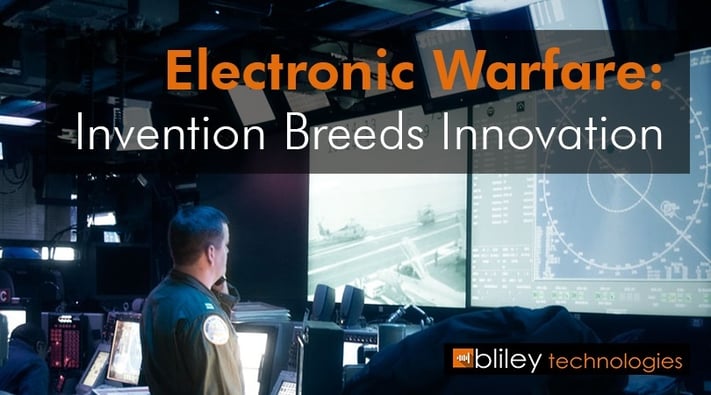 There is an old pearl of wisdom which claims that necessity is the mother of invention and nowhere is that truer than in the history of warfare, and especially electronic warfare. New military technology is always followed by innovative countermeasures developed specifically to defend against the new threat. In the case of electronic warfare, defensive measures quickly evolved into new offensive and intelligence gathering technologies.

In WW1 the debut of military aircraft and submarines brought the electromagnetic spectrum into the battlespace for the first time. Radar and sonar were necessary innovations, fostering the first electronic early detection and warning systems for the new fields of anti-submarine and anti-aircraft warfare. Intercepted radio communications for military operations quickly brought about innovations in encryption or cryptography, which in turn paved the way for early computers specializing in decryption. In electronic warfare invention always leads to further innovation.

100 years later engineers still face the ongoing challenge of staying ahead of ever-advancing electronic warfare technology at a time when electronic support is crucial to decision-makers in complex theaters of operation. Today Signal Intelligence (SIGINT) is a major contributor to that critical electronic support. Two of the subcategories of SIGINT are ELINT and COMINT, which we'll take a closer look at below.

By WW2 advances in electronics for bombing offensives by both the Germans and the British brought about the era of ELINT. The term is defined in this recently declassified article at the CIA website as "the detection and analysis of radiations from foreign electronic devices for the purpose of extracting information of value to intelligence." ELINT deals with non-communication electromagnetic radiations including:

Before the term ELINT was coined, this field of intelligence gathering was known as "noise listening" because the radiations sound like static. The challenge for engineers with ELINT is to convert the collected raw data, in the form of beeps on magnetic tape or a wire, to practical intelligence information with what the CIA describes only as "complex electronic equipment." This equipment translates the raw data into information which can be heard by ear or visualized on an oscilloscope, measured accurately, or photographed.

Ideally, the technical analysis can provide detailed information on location and capabilities. When combined with other intelligence ELINT enables an accurate assessment of the competence and intentions of the subject foreign power.

The signals targeted by COMINT are those used for communication between people and groups. The old saying from WW2 "Loose lips sink ships!" is even more applicable in today's world of hyper-communication with the internet, cell phones, email, and text messaging. COMINT, therefore, becomes an invaluable asset for intelligence gathering as part of a comprehensive SIGINT strategy.

During the Cold War, the CIA was able to use COMINT to tap into radio-telephone communications by Communist leaders as they rode around Moscow in their limousines. They were also able to track communications between Warsaw Pact nations from a tunnel dug under East Berlin.

Today, COMINT also has tactical offensive applications. The US Air Force has the EC-130H Compass Call as part of its EW arsenal and recently deployed one of the advanced electronic warfare aircraft to South Korea. The EC-130H takes COMINT far beyond passive intelligence gathering.

The modified Hercules is tasked with signal surveillance but also has the capability to interdict and disrupt those communication systems it detects with, as defined by an Air Force fact sheet, "offensive counter-information and electronic attack (or EA) capabilities in support of U.S. and Coalition tactical air, surface, and special operations forces."

The Compass Call can detect signals emitted by the enemy's communication and control gear and jam them so that communication is denied. This article at the Aviationist describes how COMINT detection is the first step toward an offensive "denial of service" attack on enemy communication systems.

Bliley Technologies is a world-leading manufacturer of low noise frequency control products. Founded in 1930, we continue today as one of the last remaining US-based quartz crystal and oscillator suppliers. We offer "one-off designs" with our Bliley Custom Shop Oscillators, as well as precision and standard crystals, custom crystals for gas and oil exploration, and a variety of temperature controlled oscillators. We also have a 40-year history in the Satellite and Space industry.

When you need the highest performing frequency control devices in the universe don't hesitate to contact us, so we can put our 85 years of experience to work for you.