What is SIGINT and How is it Used in Electronic Warfare? 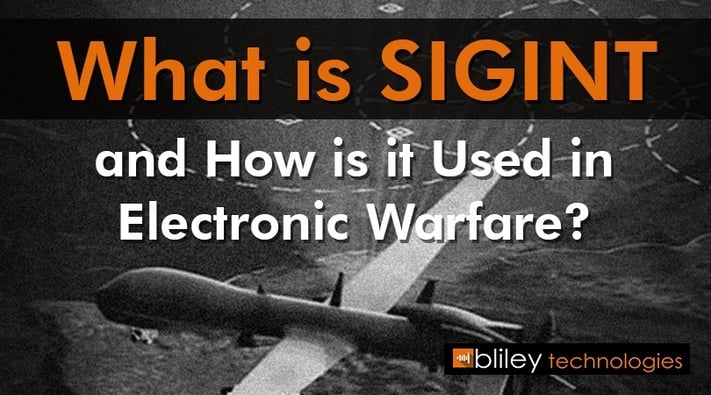 Intelligence-driven decision-making is at the heart of daily operations and strategic planning for modern militaries and intelligence agencies, and Signals Intelligence (SIGINT) is a big part of what makes it possible. Today we’ll discuss how SIGINT works and why it is so important, especially as it applies to Electronic Warfare applications.

SIGINT is the interception of signals for the purpose of gathering intelligence. It is divided into three sub-disciplines:

The origins of SIGINT can be traced back to the first world war when British forces began intercepting German radio communications to gain intelligence about their plans. This led to the use of cryptography to conceal the content of radio transmissions, and as such, cryptanalysis became an integral part of SIGINT as well.

As technology has advanced, so has the field of SIGINT. Today, the US military gathers signals intelligence through unmanned aerial vehicles (UAVs) like the Global Hawk and Reaper drones, which are equipped with powerful infrared sensors and cameras, as well as Light and Imaging Detection (LIDAR) and synthetic aperture RADAR systems to gather and transmit back valuable raw intelligence from the operational environment for analysis.

One downside of UAVs is that they fly slower and at lower altitudes than manned aircraft, leaving them more vulnerable to anti-aircraft measures. One solution is the EA-18G Growler. This plane is an updated version of the F/A-18F Super Hornet, which has been repurposed from a pure combat aircraft to an advanced, supersonic ISR platform. It can fly much faster and higher than a drone and is equipped with sensors that can detect enemy RADAR and even cell phone signals.

Another more down-to-earth example of modern SIGINT capabilities would be interception of electronic communications data by the NSA, which can provide actionable intelligence in real-time by capturing data like emails, texts, phone calls and more.

When raw SIGINT is captured, it must then be translated, interpreted or represented, as the case may be, into information which can then be analyzed and used for decision-making.

How Does SIGINT apply to Electronic Warfare?

The term Electronic Warfare (EW) applies to military action involving the use of the electromagnetic spectrum. The goal of EW is to maximize the ability of friendly forces to access and exploit the spectrum while disrupting and denying the enemy’s ability to do the same. It also encompasses the use of technology to defend against attacks on spectral capabilities and the use of offensive directed energy weapons. Examples of EW include radar jamming, communication jamming, and electronic masking, as well as countermeasures against such techniques.

As with SIGINT, EW can be divided into three sub-disciplines. These include:

It is in this third category of ES that we see the overlap of electronic warfare and SIGINT because the systems and equipment used for ES can simultaneously collect intelligence. While ES is more focused on immediate threats in the operational environment, much of the data obtained can be used to enhance raw signals intelligence and SIGINT decision-making.

ES can detect the source of an electromagnetic signal, the type of equipment generating that signal, and relevant data like frequency, modulation, etc. For example, ES personnel can detect an unknown radar signal emanating from somewhere in the battlespace. They can analyze the signal and determine the type of radar that is being used, and compare their findings with countries known to use this type of radar, and what vehicles, ships, aircraft, etc. it is typically used with. They can then ascertain the nature of the radar source, and make intelligent predictions on what the unknown actor’s intentions are.

These are exciting times to be working in the military aerospace and aviation industries. Electronic Warfare is slated to become a significant area of investment and R&D within the defense sector, and as technology becomes more advanced, the value of SIGINT will only increase.

We’re proud to provide superior, low-phase noise signal generation solutions that enhance the EW and SIGINT capabilities of our armed forces. Come learn more about our products and the markets we cater to here, and put our 85 years of radio frequency excellence to work for you.