What You Should Know About Anti-Submarine & Anti-Air Warfare 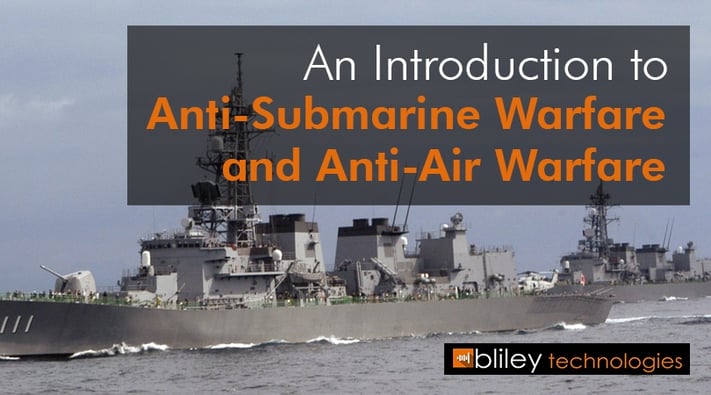 The synergy of naval and air power with joint forces is an integral feature of military planning for the US and other nations which border the oceans. Two of the most important fields of modern military operations are anti-air warfare and anti-submarine warfare. Today we will explore what these fields are, how they have evolved and what the future holds.

Also known as “ASW,” anti-submarine warfare is exactly what it sounds like: the detection, tracking, destruction, and deterrence of enemy submarines. This can be accomplished in various ways by ships operating on the surface, airplanes, sensors, and friendly submarines. It is considered an important part of the larger discipline of Underwater Warfare.

Submarines were first developed in the late 18th century but did not become a serious military asset until the late 19th century. By World War I, “U-boats” represented an incredible danger to any opposing force they targeted, not simply because of their ability to move below the surface, but because there was no reliable way to detect them. It was clear that if any naval force wanted to remain relevant in this new era, it would have to become proficient in anti-submarine warfare—and fast.

Some important anti-submarine warfare measures developed during the WWI and the interwar period include special nets designed to deny access to important harbors, sea mines, depth charges, and indicator loops, which consisted of cables laid on the seafloor to detect submarines by their magnetic fields.

These were all important developments, but modern anti-submarine warfare really kicked into high gear with the development of radar and Sound Navigation and Ranging (SONAR) technology. Radar was (and still is) effective at detecting a submarine when it is operating on the surface or if its periscope is above water. Once it is completely submerged, however, radar is no longer effective, because radio frequency pulses cannot travel underwater very well. This is where sonar comes in.

There are two primary types of sonar: “passive” sonar describes systems which listen for signals emitted by other vessels on or under the surface, and “active sonar,” which uses the same basic principle as radar, but emits pulses of sound waves rather than radio waves. Sonar can be used to detect, identify, track and target enemy submarines, and remains a key component of anti-submarine warfare to this day.

Today, countries like China and the United States have placed sensors on the ocean floor which can detect communications between submarines and bases, and with more navies around the world looking to beef up their underwater capabilities, it’s quite certain there will be many new anti-submarine warfare developments in the near future.

The US, in particular, is making anti-submarine warfare development a priority. The Navy aims to move toward a “networked, distributed combat force” that will make use of sensors and innovations like underwater UAVs to build a powerful, decentralized, command and control architecture. The new Littoral Combat Ship was specifically designed with anti-submarine operations in mind, and the Navy is also currently considering updating its anti-submarine warfare training program with products like the AUV62-AT built by Saab, an unmanned system which is designed to mimic the acoustic effects of a submarine. All these changes will ultimately help strengthen naval deterrence, enhance awareness and improve ISR capabilities by shortening the “kill chain” for anti-submarine operations.

Also called “anti-aircraft warfare” or AAW, anti-air warfare is a broad term encompassing all land, sea and air-based systems designed to defeat enemy aircraft and weapons systems. The roots of anti-air warfare can be traced back to the use of balloons in 19th-century warfare when specially modified cannons were used by the Prussian army to shoot down French communication balloons. This led to the development of specialized anti-aircraft guns used during World War I, the first war in which military aircraft were used.

After WWII, missile technology developed into mature, viable weapons systems, and a new chapter in the history of anti-air warfare began. New surface-to-air missile (SAM) designs like the Nike-Ajax could accurately strike enemy planes at much higher altitudes than older anti-aircraft guns. As detection, tracking and targeting technology advanced over the decades, the effectiveness of SAM systems has continued to increase as well.

Another important innovation was the development of much smaller, portable surface-to-air systems that could be carried by hand. MANPADS (Man-portable, air-defense systems) like the shoulder-mounted Stinger missile allow small, mobile squads to bring down enemy aircraft. But anti-air warfare systems don’t have to be sophisticated or expensive, and they don’t always end up in the right hands. In 1993, Somali militias used shoulder-mounted rocket-propelled grenade (RPG) launchers to shoot down US Black Hawk helicopters, effectively turning a cheap RPG device designed for use against tanks into an improvised SAM system.

Today, anti-air warfare is poised to enter another chapter of rapid evolution. Designs like the Russian-built S-400 system have very long ranges and are (at least it is claimed) coupled with some degree of ability to detect stealth aircraft. As drones and hypersonic weapon systems also become more widely used, it is likely that there will be an increase in research, development, and deployment of newer and better anti-air warfare systems, including directed energy weapons designed to bring down UAVs, missiles, and aircraft.

All of these trends are occurring in tandem with advances in electronic warfare (EW) and will complement one another in exciting and innovative ways. Firms that want to maintain their competitive edge in this new era of defense technology will need to make sure they are working with the highest quality products. Bliley has a long and proud history of providing our clients with superior radio frequency solutions, and we look forward to putting our skills to work to help our military and all our clients continue to make the world a safer place.