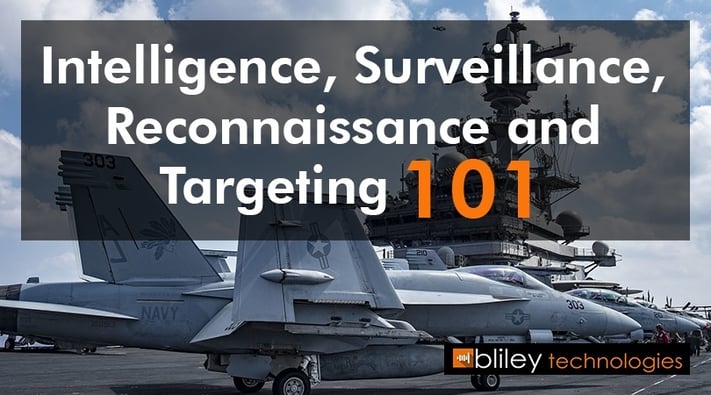 In the past, we’ve talked about the importance of C4ISR (Command & Control, Communications, Computers, Intelligence, Surveillance, and Reconnaissance) in modern military operations. Today we’re going to explore the “ISR” components of the equation in more detail, along with the concept of Targeting. This article will focus on “ISR&T,” and the vital role it plays in achieving success on the battlefield and fulfilling national security objectives.

The military world is awash in acronyms, to the point where many civilians— including those with technical backgrounds— can feel like they need to learn a whole new language when working on defense-related projects. Luckily, ISR&T as a concept is not complicated, and once you grasp it, you can see just how essential it is to modern military affairs.

Let’s break down each of the components of ISR&T:

Intelligence is the actual data that is collected in the field by humans on the ground, sensors, hacking or some other means, which is then sent back to Command and Control (C2) for analysis and presented to decision-makers.

Surveillance is the act of monitoring behavior and communications to gather Intelligence. Surveillance can be carried out in many ways, such as audio and video (cameras, microphones, wiretapping) digital (big data collection) and more.

Reconnaissance is similar to Surveillance but with one major difference: Reconnaissance is all about gathering Intelligence from the field in areas outside the control of friendly forces. This means sending human agents or sensors of some kind into enemy territory to gather vital information. A perfect example of Reconnaissance in action would be camera-equipped UAVs which provide real-time video feeds of hostile territory and targets.

Targeting is, as the name implies, the process of utilizing the Intelligence gathered to select a target to strike, as well as what weapons systems to use.

How ISR&T applies to the “Kill Chain”

The “Kill Chain” concept describes the process of a military strike from beginning to end, breaking it into sequential steps that form a “chain” of events, culminating in the “kill,” or the actual strike on the target. It can be deconstructed with the “F2T2EA” model:

How does ISR&T apply to all this? Well, ISR&T methods and technology are what enable and connect every “link” in the Kill Chain. In modern warfare, a single weaponized ISR&T platform such as an armed drone can be used to execute the entire Kill Chain process. One way to gain an advantage over the enemy is to disrupt their Kill Chain in some way (while defending against their ability to attack your own, of course). Electronic Warfare measures can be one way to disrupt an enemy Kill Chain.

The duration of the Kill Chain can vary in each situation, but in many cases it can be shortened, leading to faster, more efficient operations. Sometimes these changes are purely a matter of tactics or procedure, such as whether a President must authorize a strike versus delegating it to military decision-makers. In other cases, changes in technology can fundamentally and permanently improve the speed and effectiveness of a Kill Chain. Over time, the F2T2EA sequence may be phased out in favor of newer, more dynamic concepts, but ISR&T technology will continue to drive and shape the evolution of Kill Chain methodologies in the years to come.

With the rise of new PNT systems, hypersonic weapon systems and ever more complex electronic warfare capabilities, the importance of durable ISR&T capabilities will only increase as we continue to transition from an era of purely Industrial Warfare to one of Information Warfare as well.

RF technology is a key enabler of modern ISR&T, and in this new era, you’ll want only the best firms working on your side. With a track record of success dating back to World War II, we’re confident our engineers can get the job done. Read on to learn more about our solutions for the defense sector here.