Have you ever been on a plane with low quality Wi-Fi? You just want to post a picture from 40,000 feet, but you can’t because of the low speed connection. Bliley technologies has been working with their customers to ensure this is never a problem on their flights again.

Some users who have experienced the slow internet speeds have compared it to dial-up. Also saying they have finally found something worse than the airplane food, the airplane internet.  Before Bliley Technologies started working with in-flight connectivity companies, they were facing problems such as; connectivity issues, low data rates, data loss, and grumpy flyers. Below, you will see the problems that were occurring and why, how the in-flight entertainment companies were originally trying to solve them, and finally, how they were able to partner with Bliley to solve their technical challenges.

Have you ever been on the phone while driving only to have the call drop unexpectedly?  This likely happened as your call was transferred from one cell tower to another.  Imagine the difficulty of handing off these connections while at cruising altitude and travelling at 550 MPH! 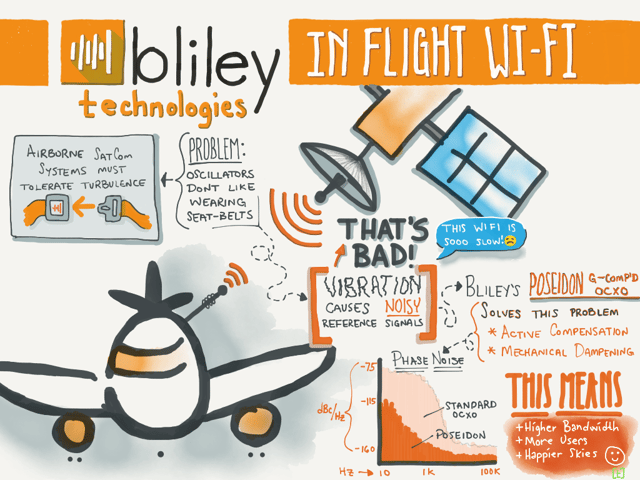 Air to ground and Satellite Communications Not Cutting it Alone

Due to the density of the coverage areas and ability to use phased arrays and beamforming, the satellite based communications provide a near drop free connection. While using a satcom-on-the-move architecture ensures global coverage, these systems can still suffer from high bit error rates (BER) due to the highly dynamic environment of the airplane.  Maintaining a strong link and high data rates require an ultra-stable clock signal.  This is especially important for Ka-band systems (the preferred RF band for in-flight connectivity systems).

So when will high-speed airborne internet connectivity be available around the world? According to AviationWeek, they say “very soon”. They already have successfully installed technology on a “business jet that will be delivered by an aircraft maker this year” that should provide the high-speed connection. While companies may have fixed their connectivity issues, they still struggled to solve the issue of low data rates.

The aircraft experiences many types of vibration which wreak havoc on the satellite receiver.  Vibration causes noise in the local oscillator which in turn causes noise on the receiver.  Following the RF chain all the way through, this vibration induced noise is the root cause of high BER in the system. When data is transmitted or received, the occurrence of a bit error forces the system to flag an error and the data must be re-transmitted (causing low data rates) or even worse, the data is lost.

In order to eliminate the vibration that was responsible for high bit error rates of these in-flight connectivity systems, Bliley introduced the Poseidon OCXO. The Poseidon Series is a low g-sensitivity customizable frequency control product specifically designed for vibration prone environments where dynamic phase noise performance is critical. The Poseidon’s active compensation and passive mechanical isolation are capable of providing up to a 100x improvement in acceleration sensitivity over standard crystal oscillators.

There are many key features that make the Poseidon Series an ideal solution for many applications including in-flight entertainment. Such features include active and passive compensation for best in class low g performance, excellent frequency stability over temperature, superb long term aging, and acceleration sensitivity. Additionally, the Poseidon is built on the solid foundation of a Bliley SC cut quartz crystal.  These crystals provide the Poseidon with exceptional static phase noise performance as well as push the overall noise floor down to one of the industry’s best for an actively vibration compensated oscillator.

By providing our customers with an ultra-stable clock with respect to phase noise and jitter performance, we are allowing them to achieve a lower bit error rate (BER), which in turn, will increase the data rates and improve the overall customer experience.

See if Poseidon 2 is the Best Choice for your Low g-Sensitivity Application!