What Will the RF Industry Look Like in 10 Years? (Emerging RF Technologies)

From smartphones to satellite service, GPS and more, RF technology is a feature of modern life that is so ubiquitous that many of us simply take it for granted.

Radio frequency engineering continues to help drive the world across many applications in both the public and private sectors. But technology advances so fast, it’s sometimes hard to predict what the world will look like in just a few years. Back in 2000, how many people outside the industry would have guessed that within 10 years, they’d be watching streaming videos on their phone?

It’s amazing how far we’ve come in such a short time, and there is no sign of the demand for advanced RF technologies slowing down. Private companies, governments and militaries around the world are competing to have the latest in radio frequency innovation.

In this post, we will answer the questions: What will the RF industry look a decade from now? What are the current and future trends, and how do we stay ahead of the curve? How do we find vendors who see the writing on the wall and know where things are going?

A Glimpse of the Future: Upcoming Trends and the Future of RF Technologies

If you’ve been following developments in the radio frequency field, you probably know that the upcoming 5G revolution is one of the BIGGEST changes on the horizon. By 2027, it’s a safe bet that we can expect 5G networks to have been up and running for some time, and consumer expectations for mobile speed and performance will be radically higher than today. With more and more people embracing smartphones around the world, the demand for data will continue to rise, and legacy bandwidth ranges, which run below 6GHZ, will simply not be sufficient to meet this challenge. One of the first public tests of 5G yielded astonishing speeds of 10 gigabytes per second at up to 73GHz. There’s no doubt that 5G will offer lightning fast coverage at frequencies which were previously used only for military and satellite applications.

5G networks will play an integral part in speeding up wireless communications, perfecting virtual reality, and connecting millions of devices we use today. It will be the key to ushering in the “Internet of Things” (IoT), in which countless household products, handheld 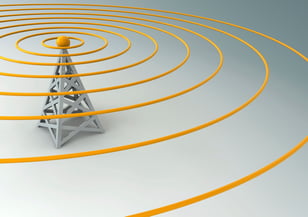 This is part of what Alphabet, Inc Executive Chairman Eric Schmidt meant when he claimed that the internet as we know it will “disappear”; it will become so omnipresent and integrated into all the devices we use, that we’ll barely recognize it as distinct from “real life”. Advancement in radio frequency technology is the magic that is going to make this all happen.

In a world of rapid technological advancement and political uncertainty, the need to keep a military edge is stronger than ever. In the near-term, global electronic warfare (EW) spending is expected to exceed $9.3 billion by 2022, and the demand for advancement in military RF and microwave tech will only increase. (Strategy Analytics)

EW is the “use of electromagnetic (EM) and directed energy to control the electromagnetic spectrum, or attack the enemy”. (MWRF) Major defense contractors will incorporate more and more EW tech into their products in the decade to come. Lockheed-Martin, for example, features sophisticated EW abilities in their new F-35 fighter which allows it to jam enemy frequencies, suppress radar, and more.

Many of these new EW systems utilize gallium-nitride (GaN) devices to help meet their demanding power requirements, as well as low-noise amplifiers (LNA) and more. Additionally, the use of unmanned vehicles on land, in the air and the sea will also increase, along with a need for sophisticated RF solutions to communicate with and control these machines on secure networks.

In both the military and the commercial sector, the need for advanced RF solutions for satellite communications (SATCOM) will also increase. One particularly ambitious project requiring advanced RF engineering is the global Wi-Fi project from SpaceX, which will require over 4000 satellites in orbit to beam wireless internet down to people all over the world, using frequencies of 10-30ghz, in the Ku and Ka-band range- and that’s just one company!

is that the future is bright and the demand for radio frequency engineering is high. The next ten years will see enormous growth and innovation in the industry. If you’re looking for high quality, frequency control solutions for your next project, we’d love to hear from you. With 85 years of experience in the business, we know where RF has been, and where it’s going from here. We’ll help you meet industry challenges and opportunities through 2027 and beyond. Let's do this!